How Much Sleep Does My Child Need?

Most parents recognize that small children need more sleep than adults do, but the question of exactly how much sleep children need is often 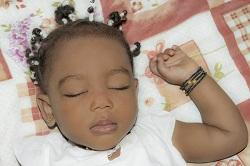 still a mystery. Many parents worry that their children aren't sleeping enough or that they are sleeping too much.

Thankfully, there are guidelines that let parents know about how much sleep their little ones should be getting. While sleep needs will vary from individual to individual, here are the usual amounts of sleep children need by age.

Newborn to 2 Months: Being outside of the womb comes as a huge change to infants. There is so much to see and take in! This is why newborns need an impressive 15 to 18 hours of sleep a day. Infants generally do not sleep more than a couple hours at a stretch during the night, and they often take three to five naps during the day.

2 to 4 Months: Babies ages two to four months still need a great deal of sleep, but not quite as much as newborns. Babies this age generally sleep 14 to 16 hours total, which includes three daytime naps. Some babies sleep through the night at this age, but many do not.

4 to 6 Months: By the time babies reach half a year old, they typically sleep anywhere from 14 to 15 hours a day, which includes two to three naps.

6 Months to 1 Year: At this age, babies typically need 14 hours of sleep, which includes two naps.

1 Year to 2 Years: Once babies reach a year old, they typically only need 13 to 14 hours of sleep a day. They also generally switch from two daily naps to one.

2 Years to 3 Years: At this age, little ones typically need about 12 to 14 hours of sleep. Most two and three year olds still nap once during the day, though some may fight nap time or give it up altogether around this age.

3 Year to 5 Years: Preschoolers generally need only 11 to 13 hours of sleep each night, all of which they get overnight, as children usually stop napping sometime within this range.

If your child gets a little more or less than the guidelines Â­ that's okay! These guidelines are justto give you an idea of what you should expect. The goal isn't to meet the guidelines, but to raise a child who is wellÂ­-rested, active and ready for the day!